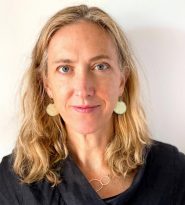 Working with Feinstein Since: 2002
Based in: Budapest, Hungary and South Dartmouth, Massachusetts

Elizabeth Stites directs Feinstein’s Research Program on Conflict and Livelihoods, focused on the effects of conflict and violence on civilian livelihoods. She is particularly interested in how different members within a household make changes to their livelihoods in times of conflict or crisis, and also how violence and livelihood strategies can reinforce each other. On the policy level she examines the effects of humanitarian, development, and military policies on livelihoods, security, and gender roles. Her field work aims to improve the effectiveness of international and national policies through evidence-based research reflecting the lived experiences of local communities. She aims to understand the challenges and hopes that inform people’s daily decision making, and strives to ensure that local people’s voices and experiences are heard in contexts in which they are often invisible. She has worked in multiple countries in sub-Saharan Africa, in Afghanistan, Bosnia, and Nepal and on the Syria crisis.

Prior to joining Feinstein, Elizabeth worked as a consultant to UN organizations, academic centers, and international non-profits. She lived in South Africa for four years in the 1990s, where she researched post-apartheid land restitution and worked closely with families, community groups, government agencies, and non-profit organizations.

Elizabeth holds a B.A. from Wesleyan University, an M.A. from the University of Cape Town (South Africa), and an M.A.L.D. and a Ph.D. from The Fletcher School at Tufts University.

Helping Ukrainians means listening to their needs – 3 lessons for aid groups from Syria’s war Millions of Syrians remain displaced from the conflict that began in 2011. Delil Souleiman/AFP…

The Feinstein International Center has been working with academic colleagues in Sudan since it began working in the country more than 20 years ago. However, developing partnerships at the institutional…

Research and Capacity-building Support to the Nawiri Project

In 2015, more than 190 countries committed to end child marriage by 2030 as part of the Sustainable Development Goals (SDGs). These projects seek to develop better evidence to inform policy, programs, and advocacy to address child marriage in humanitarian contexts.

This assessment examines three ways in which national and international actors have sought to implement long-term, “durable,” solutions to internal displacement in Ethiopia’s Somali Region: resettlement, relocation, and local integration.

The gender gap analysis analyzes available information and identifies evidence and knowledge gaps around livelihood systems from a gender perspective in Isiolo and Marsabit Counties in northern Kenya.