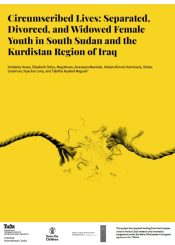 Very little is known about the experiences of female youth who marry under 18 and later become separated, divorced, or widowed. This research project follows the lives of such youth who were displaced by conflict in the Kurdistan Region of Iraq (KRI) and South Sudan. This briefing paper underscores the unique vulnerabilities and challenges that separated, divorced, and widowed female youth face. These include profound mental health difficulties, economic deprivation, and social stigma and isolation. Additionally, female youth who are mothers often lose custody of their children if they are divorced or widowed. This provokes profound negative psychosocial consequences. Despite these unique hardships, humanitarian programs rarely target these special categories of female youth.