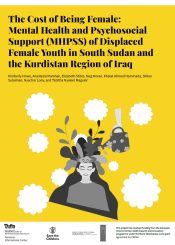 The Cost of Being Female: Mental Health and Psychosocial Support of Displaced Female Youth in South Sudan and the Kurdistan Region of Iraq

In following the lives of displaced female youth in South Sudan and the Kurdistan Region of Iraq, the research team was struck by how central mental health—in particular poor mental health and psychosocial functioning (MHPSS)—was to the lives of the study participants. This briefing paper outlines the general situation of displaced female youth—unmarried, married, divorced, widowed—from a MHPSS lens. The study shows how female youth in displacement are negatively impacted by traumatic experiences coming from their families, communities, and as a result of war. It also provides evidence for the long-term negative impacts of being forcibly married, divorced, and widowed. However, some participants who married early, or had pregnancies out of wedlock described the positive impacts of these events.