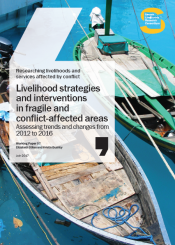 Livelihood strategies and interventions in fragile and conflict-affected areas: assessing trends and changes from 2012 to 2016

Most people survive conflict and crisis not through international interventions but by relying on their own efforts, adaptations, networks, and systems. By the same token, some of the greatest suffering and repercussions of conflict and crisis arise from the damage done to these systems and the institutions that support livelihood adaptation. In the early 1980s, a growing number of international practitioners and academics began focusing on the systems and strategies that people pursue, and the environments in which these systems operate. This thinking found its way into donor discourse and the programming of international organizations, and became known as the “livelihoods approach.”

Although initially envisaged as most relevant to development contexts, by the late 1990s there was a growing recognition within the humanitarian community of the need to better understand livelihoods in conflict-affected and fragile environments. Today there is increased attention to both the ways in which local populations seek to survive or prosper within contexts of hardship and crisis, and to the successes, failures and lessons learned from national and international interventions undertaken in an effort to protect, support, or promote local livelihoods.

This report discusses some of the major conceptual trends between 2012 and 2016 in how stakeholders view livelihoods; examines selected livelihood strategies of conflict-affected populations that have become more visible in recent years; and reviews advances in the nature, type, and scope of interventions initiated by humanitarian agencies and organizations.

The Secure Livelihoods Research Consortium (SLRC) is a six-year, eight-country research study, led by the Overseas Development Institute (ODI) in London. SLRC investigates livelihoods, access to basic services, and social protection in fragile and conflict-affected situations. The research is funded by the UK Department for International Development (DfID), Irish Aid, and the European Community (EC). The Feinstein International Center leads SLRC research in South Sudan and Uganda in addition to its participation in the Sierra Leone research.