Research Back To Research Themes

Research and Capacity-building Support to the Nawiri Project

High rates of global acute malnutrition (GAM) are a continuing problem in Kenya’s arid and semi-arid lands (ASALs) despite ongoing humanitarian and development efforts. Elsewhere in Kenya wasting rates are much lower, and rates of stunting and underweight are generally improving, which puts the situation in the Kenyan ASALs in sharp contrast. Part of the failure to sustainably address persistent acute malnutrition is that stakeholders lack evidence on and understanding of the drivers of acute malnutrition, which limits their ability to find solutions to address it. Internationally, there is increasing recognition of the problem of persistent acute malnutrition and the need to increase efforts to prevent child wasting as part of the Sustainable Development Goals (SDGs).

Nutrition in ASALs Within Integrated Resilient Institutions (Nawiri)  is a five-year evidence-based development project in four of Kenya’s northern counties. Catholic Relief Services (CRS) leads a consortium of partners in Isiolo and Marsabit Counties, and Feinstein provides research and capacity-building support to CRS. The project is funded by USAID’s Bureau for Humanitarian Assistance.

Nawiri uses a unique two phased approach. In the first phase (years 1 – 2), Nawiri is using a collaborative learning process involving local actors including communities, county systems and institutions, civil society, and the private sector to  increase project and stakeholder understanding of the drivers of persistent acute malnutrition. The learning will be used to jointly design evidence-based, context-sensitive, systems-driven, multi-sectoral approaches to sustainably reduce acute malnutrition, which will be implemented in the second phase (years 3 – 5). The phase 2 program will be managed locally to ensure systems strengthening. 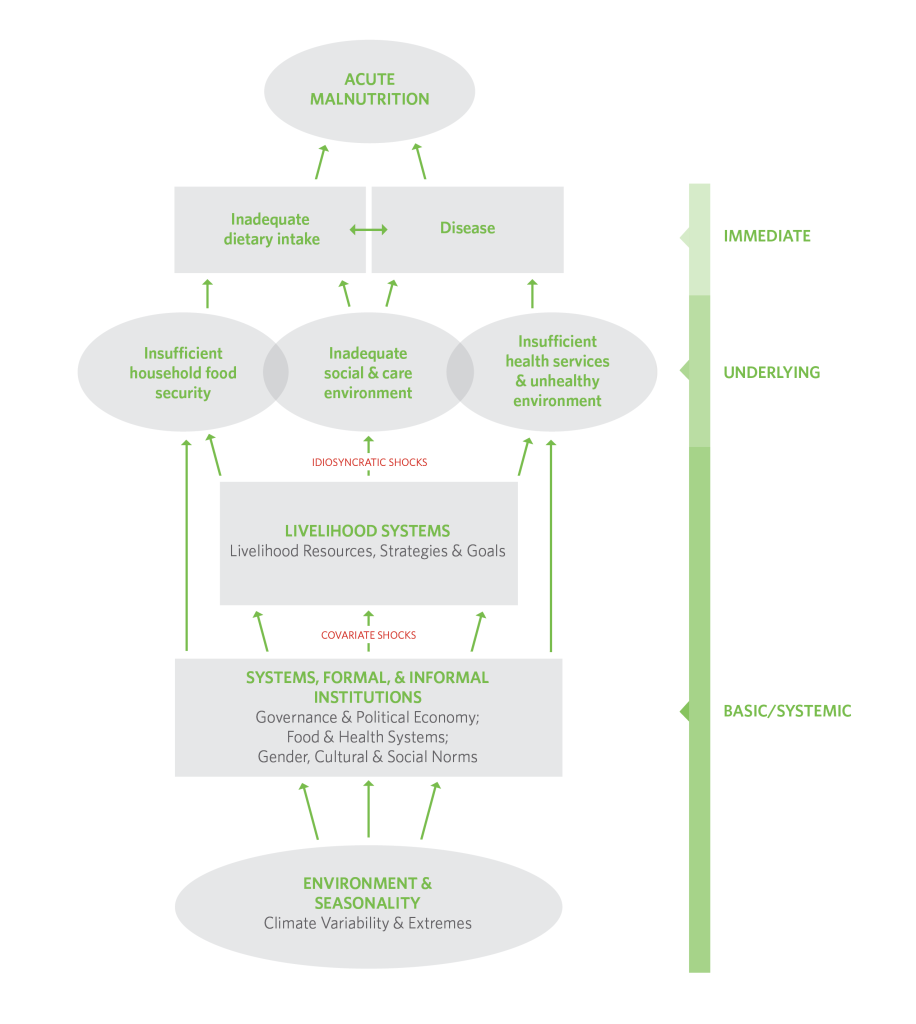 The Feinstein team is undertaking a series of desk studies, stakeholder analyses, and formative research studies to help Nawiri use the framework to design and implement a context specific program.

At the start of the project, Feinstein undertook a series of desk studies to explore a variety of questions related to the causal framework for addressing persistent acute malnutrition. The studies explored the following research questions:

Each of these studies is available in the publications tab.

Understanding stakeholder knowledge and perspectives on the problem of persistent acute malnutrition and its drivers is central to the design and implementation of stakeholder-driven, sustainable approaches. Therefore, Feinstein and CRS are working to understand stakeholder perspectives through surveys, conversations, and learning events. A report on the first stakeholder survey is available in the publications tab.

In 2018, Feinstein piloted participatory epidemiology (PE) to look at the causes and seasonality of malnutrition in pastoralist and agro-pastoralist communities in Karamoja, Uganda. That study demonstrated that analysis using PE can generate a wealth of rigorous, technically plausible information within a matter of weeks or months. It also yielded detailed information on the causes of malnutrition and the relationship between these causes and seasonality and livelihoods and identified new seasonal patterns of malnutrition missed by biannual nutrition surveys. The results of the Karamoja study encouraged the Nawiri partners to further pilot and test the PE approach in the context of the Kenyan ASALs. The reports of PE exercises in Isiolo and Marsabit counties are available in the publications tab.

While the effects of seasonality on malnutrition are widely recognized, assumptions rather than evidence frequently inform programs and policies to address persistent acute malnutrition. Previous research conducted by Feinstein in the Sahel has found a more complex and nuanced seasonal pattern of acute malnutrition than previously identified. To build an evidence base on the seasonality of malnutrition and its drivers for Nawiri, Feinstein, CRS, and Kenyatta University are carrying out a two-year mixed methods longitudinal panel study that includes quantitative data collection every other month, qualitative inquiry once a year, and an annual survey. The study will be done across three sentinel sites in Isiolo and Marsabit, each roughly representing pastoralist, agropastoralist, and peri-urban households.

The evidence collected through this study will help promote a shared understanding of the causes of malnutrition among stakeholders, enabling local, national, and international stakeholders to better design and target prevention and treatment strategies and approaches.

This report synthesizes the Nawiri research findings up to the end of September 2021 in relation to the conceptual framework for addressing acute malnutrition in northern Kenya.

This desk study provides an overview of the patterns and variability in climate, conflict, disasters, and nutrition outcomes using secondary data for Marsabit and Isiolo counties in northern Kenya.

The gender gap analysis analyzes available information and identifies evidence and knowledge gaps around livelihood systems from a gender perspective in Isiolo and Marsabit Counties in northern Kenya.

This desk study examines the existing knowledge on how livelihood systems influenced nutritional outcomes in the Marsabit and Isiolo counties in northern Kenya.

The review confirms that acute malnutrition is a problem in the Kenya ASALs, and that most of the drivers are under-studied, and yet several specific assumptions permeate the literature and recommendations.

This study seeks to understand how land access and natural resource management policies, institutions, and relationships are changing in the Kenyan ASALs, with what consequences and for whom, and the potential impact on livelihoods, food security, and nutritional status.

This report describes findings from a preliminary stakeholder survey on perceptions of malnutrition in northern Kenya.

Using participatory epidemiology to investigate the causes and seasonality of acute malnutrition in Marsabit and Isiolo counties, northern Kenya: methods and experiences

This report describes the methods used and experiences from a community-level analysis of the causes and seasonality malnutrition in selected locations in Marsabit and Isiolo counties in Kenya.

Women’s knowledge on the seasonality and causes of child malnutrition in Isiolo county, Kenya

This report presents the results of a participatory analysis of the causes and seasonality of malnutrition in Borana children and mothers in Cherab and Chari wards in Isiolo county, Kenya.

Women’s knowledge on the seasonality and causes of child malnutrition in Marsabit county, Kenya

This report presents the results of a participatory analysis of the causes and seasonality of malnutrition in children and mothers in North Horr and Loiyangalani wards in Marsabit county, Kenya.

This brief presents the results from the Mount Kulal pilot that investigated the seasonality and basic causes of acute malnutrition in northern Kenya.