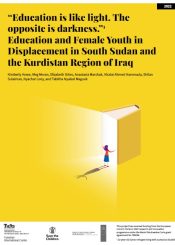 There is a demonstrated relationship between early marriage and education. Female youth who are out of school are more likely to marry, and those youth who marry while in school, are more likely to drop out. By analyzing the stories of 140 female youth displaced by conflict in South Sudan and the Kurdistan Region of Iraq (KRI), we examine the role of marital status and motherhood on schooling experience and educational interruption, attainment, and aspirations. We look specifically at the unique challenges faced by female youth living with disabilities. The paper also analyzes the role of gender norms, community perceptions, and family attitudes on adolescent girls’ ability to access education.