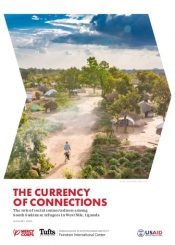 Currency of Connections: The role of social connectedness among South Sudanese refugees in West Nile, Uganda

An understanding of the ways in which social connectedness functions in times of crisis and upheaval can assist humanitarian actors in designing programs that support existing social support networks.

This paper examines the role of social connectedness among South Sudanese refugees in settlements in West Nile, Uganda. It looks at how they establish and leverage their social connectedness throughout the process of displacement and settlement. We found that experiences and perspectives differ by gender, age, socioeconomic position, and previous experiences of displacement and seek to reflect this diversity of perspectives.

This paper illustrates how refugees create new social connections based on proximity and shared experience, and how these networks provide critical material and non-material support to cope with hardship. Humanitarian food aid serves as a currency of assistance, sharing, and reciprocity within these networks. Cash, on the other hand, has much more limited circulation. Our findings also demonstrate that refugees both receive and give material support to those still in South Sudan through a number of informal means of transfer.

Researchers used qualitative methods with men and women of different ages in Rhino Camp and Palorinya settlements in the districts of Arua and Moyo, respectively, in the West Nile sub-region. We examined the functions and characteristics of social connections prior to and during flight from place of origin, the ways in which refugees established new connections and how these new connections differed from those prior to displacement, and how refugees sought to maintain connections to those back in South Sudan.

The project is carried out in a partnership between Mercy Corps and Feinstein International Center. This report is made possible by the support of the American People through the United States Agency for International Development (USAID), with support from the Office of Foreign Disaster Assistance. The views expressed in this report do not necessarily reflect the views of USAID or the United States Government.