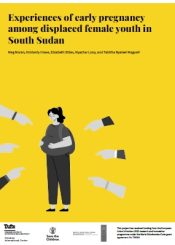 In South Sudan, one in three girls become pregnant before turning 15 (UNCIEF 2020). The Ministry of Gender, Child, and Social Welfare reports that the risks of sexual abuse, child marriage, and early pregnancy have increased during the last few years given school closures and increased stress related to COVID-19 (UNICEF 2020). This briefing paper follows the lives of displaced female youth in South Sudan that had unintended pregnancies under the age of 18. The paper describes the circumstances leading to early pregnancy including a profound lack of access to information about sexual and reproductive health. It also focuses on the lives of female youth after becoming aware of their pregnancies and the impact of early pregnancy on marriage, education, mental health, family relationships, and household economics. The paper highlights the special situation of early pregnancy and female youth living with disabilities.