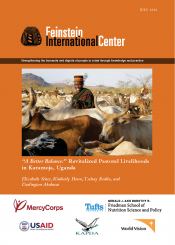 Following years of conflict and national policies aimed at encouraging sedentarization of pastoral populations, international and bilateral actors are increasingly shifting their focus towards supporting animal production systems. This report reviews the state of revitalized pastoral livelihoods in the Karamoja region of northeastern Uganda and examines how animal ownership affects a household’s ability to weather shocks.
This report shows:

Despite the progress, we found four major barriers to the revitalization of pastoral production: growing inequity of animal ownership, poor animal health, limited mobility, and a poor policy environment. The report provides specific recommendations to address each of these barriers.

This report emerges from the partnership between the Feinstein International Center and Mercy Corps as part of the Growth, Health and Governance project funded by USAID. Findings are based on field work in early 2016 with four communities in northern and southern Karamoja.