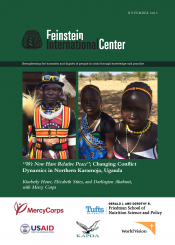 This study provides a nuanced understanding of the transformation of violence for women, men, girls and boys in northern Karamoja at the household, community, district and the regional levels. Drivers of insecurity, as well as access to and the perceived efficacy of conflict mitigation initiatives are explored. This study also examines intra-clan and inter-ethnic relationships, as well as the ties between residents and various conflict mitigation actors. We find that the overall security situation in northern Karamoja has improved due to the decline of large-scale cattle raids, and that inter-ethnic relationships have improved. Currently, the major threats to security exist within households and villages and include theft of assets committed by lonetia “thugs”, sexual and gender based violence in the form of domestic violence and forced marriage of girls. The study concludes with a comprehensive set of recommendations for donors, policymakers and practitioners.