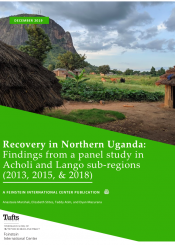 Recovery in Northern Uganda: Findings from a panel study in Acholi and Lango sub-regions

This report describes household recovery in northern Uganda from the 20 years of conflict between the Lord’s Resistance Army (LRA) and the Government of Uganda (GoU) by following the same households between 2013 and 2018. The trends in food security, wealth, and access to services show that, although frequently perceived as such, recovery is not a linear process and also indicates that household resilience is consistently upended by idiosyncratic and covariate shocks. Despite the cessation of conflict in 2007, the effects of the LRA/GoU war in northern Uganda remain. Thus, it is essential to continue to invest in this region with special attention to the legacy of the decades long war.

The Secure Livelihoods Research Consortium (SLRC) is a six-year, eight-country research study, led by the Overseas Development Institute (ODI) in London. SLRC investigates livelihoods, access to basic services, and social protection in fragile and conflict-affected situations. The UK Department for International Development (DfID), Irish Aid, and the European Community (EC) funded the research. The Feinstein International Center leads SLRC research in South Sudan and Uganda in addition to its participation in the Sierra Leone research.