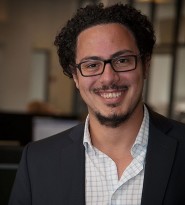 William Chemaly brings a practitioner’s perspective with his hands-on work in several humanitarian and development response operations, incl. Lebanon, Uganda, Kenya, Afghanistan, Burundi, Colombia, DR Congo, Haiti, Serbia and Yemen. William is the OCHA’s Deputy Head of the Regional Office for the Syria Crisis and has an avid interest in the area of humanitarian negotiations, policies, linking of humanitarian and development work, and politics of complex humanitarian emergencies. Previously, William served as Representative of the Danish Refugee Council (DRC) in Geneva prior to which he founded the Joint IDP Profiling Service (JIPS) and headed its team for several years (2009-2013). Before JIPS years William served in several operations with CARE international, OHCHR, ILO and UNHCR, He earned degrees in Economics, International Relations and Human Rights Law from Saint Joseph University in Lebanon, the University of Malta and the National University of Ireland in Galway.

On August 31, JIPS hosted a launch event to share two new projects. Presented first was the second version of the Dynamic Analysis and Reporting Tool (DART). DART is an online easy-to-use system built…

This book is a joint effort from JIPS and the Feinstein International Center that calls for an update to the existing international guidance for profiling.