Commentary: Why Tufts is undertaking a livestock tracking study in West Darfur

Anne Radday, Hussein Sulieman, and Helen Young describe the importance of their livestock tracking study in West Darfur, Sudan as the study gets underway. 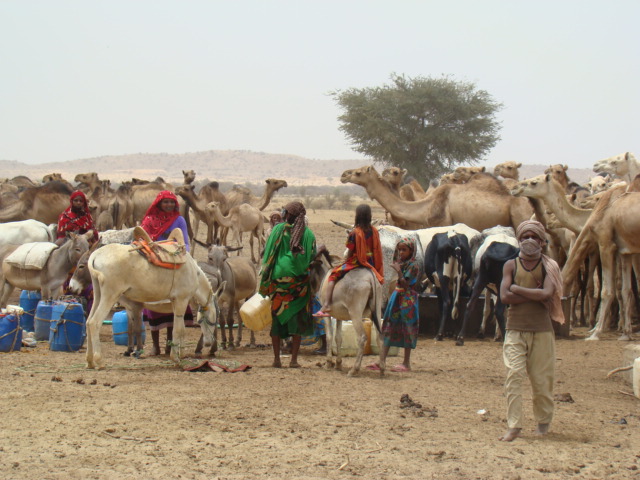 The Building Resilience in Chad and Sudan (BRICS) consortium supports livelihood production systems in the Darfur region of Sudan, including pastoralism and farming, each of which raise livestock, according to different systems.

More than a decade of international humanitarian response has tended to target displaced and conflict-affected farmers, with relatively less attention to pastoralists. At the same time pastoralist issues (such as access to education, healthcare, reduction in rangelands and expansion of farms), have received less attention from policymakers despite the contribution of livestock, and predominantly pastoralist production, to the domestic economy as well as exports (see “The Contribution of Livestock to the Sudan Economy”).

But there is increasing national and international interest in pastoralists and pastoralist production, and their integration within farming systems, due to growing recognition of the socio-economic importance of the livelihood strategy, among other things (see “Policy Framework for Pastoralism in Africa”).

Therefore, as part of its research agenda for BRICS, Tufts University seeks to better understand livestock mobility among the BRICS population in Sudan in two areas:

The underlying premise is that livestock mobility is driven by extreme climate variability and by the unpredictable distribution of pasture over time and space. Therefore, mobility is a key element of resilience because it enables herds to maximize the time they spend on more nutritious green pasture in the rainy season, while managing the availability of pasture in the dry season.

This idea has been established in earlier studies and is supported by a wider body of evidence and policy (see “Risk, Resilience, and Mobility”; “Modern and Mobile”; and “Valuing Variability”). This new study will take it a step further and look at differences between producers to compare how they each use land and explore their different climate adaptation strategies.

The BRICS livestock mobility study entails tracking a variety of herds (camels, sheep and cattle) with GPS collars to map their movements. Undertaking such a study in Sudan required careful planning and partnerships because the GPS technology is relatively new and we anticipated that communities would have some concerns.

We therefore adopted a phased approach that was led by Hussein Sulieman, a Sudanese scholar, in partnership with the Ministry of Animal Resources at the federal, state, and locality levels in West Darfur. Planning began in early 2016, with two preparatory visits to West Darfur.

During these visits, Sulieman introduced the project at the state, locality and community levels and explored the study’s logistics, and confirmed interest from various stakeholders in supporting or participating in the study through small meetings with separate stakeholder groups. He discussed advantages of introducing livestock monitoring technology and possible drawbacks and risks associated with the study.

This helped the communities fully assess whether they wanted to participate, and provided us with information about issues we should anticipate. With support at all levels, we then purchased and imported the tracking devices.

These devices are “store-on-board,” meaning that they do not transmit data – the data can only be downloaded directly from the device to a computer, which is more acceptable to the herders and local stakeholders.

In April, we formally began the study with a kick-off workshop to introduce the GPS collaring devices, demonstrate the technology, explain the goals and logistics for the study, and plan for any potential challenges. The Ministry of Animal Resources hosted the event, which included participants from local, state, and federal ministries and institutions; international organizations; as well as communities and tribes.

Community representatives said they hope the study will help governmental institutions—such as the ministry of livestock—and NGOs better understand their own experiences.  At the same time, they identified risks associated with the study, most notably livestock looting and potential competition between herders who want their herds to participate in the study.

With potential risks and benefits in mind, we went with the leaders from three communities to visit candidate herders and herds. We discussed the study and, when appropriate, invited them to participate. Local vets accompanied us to check the animals’ health before we attached the collars. We have now attached GPS tracking devices to animals in 18 herds from three villages.

From April to September 2017, the tracking devices will take readings every half an hour, allowing us to plot a picture of herd movement patterns. Once we have the data we will compare the livestock routes with other seasonal data including, vegetative biomass, rainfall, water sources, and land use patterns to develop maps. These maps are useful at the local level for management of natural resources, as well as for policy makers in planning service delivery, and for understanding the importance of pastoralist livestock mobility.

This is the first post in a series that we will contribute as the study evolves.