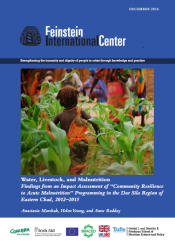 Water, Livestock, and Malnutrition: Findings from an Impact Assessment

The Dar Sila region of eastern Chad experiences highly variable rainfall, seasonal food insecurity, and a high prevalence of acute malnutrition. In 2012, Concern Worldwide implemented a multisectoral program that aimed to prevent seasonal spikes in acute malnutrition in the region. The program, called Community Resilience to Acute Malnutrition (CRAM), focused on increasing access to clean water and primary healthcare, and improving hygiene practices and food security. Feinstein designed and conducted a clustered randomized control trial from 2012 to 2015 to assess the impact of the program and identify potential links to malnutrition.

The study found that CRAM had a significant impact. The multisectoral intervention reduced the prevalence of acute and chronic malnutrition among children in the intervention households compared to non-intervention households. The report also tries to unpack why CRAM is working and how it could potentially be improved. The data suggest that the positive impact of CRAM maybe due to access to clean water and better hygiene practices along the water chain (from point of use to transport and storage). Furthermore, a significant relationship between village cattle density and child nutritional status suggests that contamination from cattle feces along the water chain could be linked to a higher prevalence of acute malnutrition. However, villages with a history of pastoralism and hence livestock ownership have children with significantly better nutritional outcomes despite greater ownership of cattle. The qualitative data suggests that different types of livestock water management practices and seasonal migration of cattle in the former pastoralist households could be reducing contamination by cattle of the water source and along the water chain. The findings presented in the report have direct implications for future programming in Chad and wider learning around multisectoral nutrition approaches.

A briefing paper about the evaluation is available here.