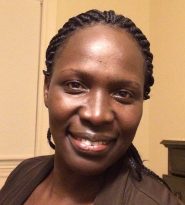 Working with Feinstein Since: 2008
Based in: Uganda

Teddy Atim is a visiting fellow at the Feinstein International Center, where she collaborates on various research projects. She has more 15 years of experience working as a practitioner and researcher in humanitarian emergencies and post conflict settings. Her work is mainly focused in Uganda and she has also collaborated on research in other conflict affected states in Africa, including Rwanda, Democratic Republic of Congo, Liberia, Sierra Leone, Nigeria, and Niger. Her research examines how experiencing armed conflict, forced conscription, sexual violence, forced impregnation and child bearing, killings and forced disappearance, and loss of livelihoods impacts the lives of affected populations, both during and in the aftermath of conflict. She also studies the psychosocial impacts of armed conflict, recovery, transitional justice, and serious crimes.

Teddy also has extensive experience as a practitioner, working with children, women, young people, families, and communities affected by armed conflict. She worked with various national and international organizations to provide humanitarian assistance, including grant making in humanitarian situations, peace building, and recovery.

She holds a B.A. in social sciences from Makerere University in Kampala, Uganda, an M.A. in humanitarian assistance from The Fletcher School of Law and Diplomacy and the Friedman School of Nutrition Science and Policy at Tufts University, and a Ph.D. in humanitarian/development studies from Wageningen University, the Netherlands.

The Daily monitor, one of the  major daily newspapers in Uganda, published an article of “School’s Out: Why Northern Uganda’s Girls and Boys Are Not Getting an Education and What…

Managing life after war: How young people in Uganda are coping

A multi-year, international, and comparative action-oriented research program to develop a better evidence base to inform policy, programs, and advocacy to address child marriage in humanitarian contexts.

Feed the Future Uganda One Nutrition in Complex Environments

The One Nutrition in Complex Environments (ONCE) study tests a new way of preventing and addressing acute malnutrition through a cluster-randomized trial.

Recovery in Northern Uganda: Findings from a panel study in Acholi and Lango sub-regions

Schools out: Why northern Uganda’s girls and boys are not getting an education and what to do about it

This working paper presents findings from research examining the sharp decrease in girls and boys school attendance that was witnessed between 2013–2018 in northern Uganda.