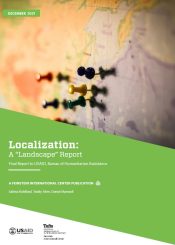 This study examined the literature and spoke to over five dozen key informants from different perspectives, positions, and countries across the humanitarian sector. It found that there was a broad spectrum of understanding in terms of the definitions, goals, and motivations behind the localization of humanitarian aid, including some who reject the term. In the five years since the WHS, there has been progress towards localization in some sectors and countries, but as a whole, the system has fallen short of its goals of change.

Some of the barriers cited by key informants and the literature include the power dynamics at the heart of the system, the persistence of inequitable structures, capacity concerns across all actors in the system, challenges with how the sector manages risk, and some context-specific barriers. However, there has been some progress driven by the organizing work of local and national actors, changes and programs from progressive international actors and donors, the expansion of some more inclusive funding and coordination mechanisms, and issues such as the COVID-19 pandemic and the global discourse about racial equity and decolonization. The report concludes with recommendations for how large institutional donors can contribute to advancing the localization agenda through direct funding reforms, investing in creating an enabling environment for locally led humanitarian action, relationship building with diverse local actors, and greater internal and collective action among donors.

This is one of four studies in a series of “landscape reports” commissioned by the Bureau of Humanitarian Assistance of USAID.