Teddy Atim is a visiting fellow at the Feinstein International Center, where she collaborates on various research projects. Teddy began her career working with people and communities affected by armed conflict in Uganda. She worked with various national and international organizations to provide humanitarian assistance, including grant making in humanitarian situations, peace building, and recovery. She transitioned to research after completing a Master of Arts in Humanitarian Assistance at The Fletcher and Friedman Schools at Tufts University. Today, she studies the effects of conflict on young people in humanitarian emergencies and post conflict settings. 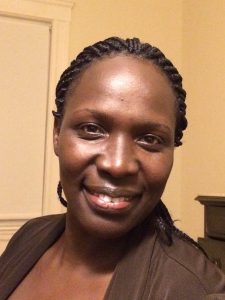 Many scholars from the Global North who study conflict do so out of interest rather than personal experience. Teddy, however, grew up in Uganda and her work is personally significant because she lived through the conflict. Teddy’s experience of war as a child set her on a path of working with NGOs and conducting research in Uganda. Teddy first became acquainted with the Feinstein International Center in 2001 when she was working for an organization that helped parents of abducted children in northern Uganda. At the time, Dyan Mazurana was studying girls affected by conflict in Uganda, Mozambique, and Sierra Leone and she enlisted Teddy to help organize the field study and translate conversations. Teddy stayed in touch with Dyan and eventually came to Tufts as a MAHA (Master of Arts in Humanitarian Aid) student. After graduating from the MAHA program, Teddy returned to Uganda to continue working to improve the lives of youth in post conflict settings.

Today, Teddy’s research focuses on understanding how young people survive conflict and re-build their lives in the aftermath and how these processes vary across genders and generations. Understanding the lives of youth in Uganda is critical to moving forward because young people make up 70% of the country. While they are the majority, youth in Uganda consistently struggle to find employment, which many people argue leads to a higher potential for conflict. While Teddy doesn’t buy into this perspective, she emphasizes that youth are the most affected by conflict because they are either manipulated into fighting or they volunteer because they are fed up with the poor conditions, such as unemployment, that they face in the country.

Teddy believes that it is imperative for others to understand that when a conflict ends, the associated effects on children don’t simply go away. Conflict is often the manifestation of a socio-cultural context. Therefore, understanding the impacts of conflict requires an understanding of how a culture is embedded in the conflict and in society after the ceasefire. It is important for researchers and practitioners with a grounded perspective such as Teddy to help shape how youth understand their own experiences through conflict and their own situations so that they too can become future scholars and continue a cycle of working with young people.

It is important for people who have experienced conflicts to study the effects because they bring a perspective that scholars from the Global North cannot bring. However, it is challenging for Southern scholars such as Teddy to gain recognition because the academic environment in their own countries cannot support them. Knowledge production is commercialized and most journals do not come out of the Global South. Academic skills such as writing are not as entrenched in places like Uganda as they are in the Global North therefore it can be more difficult for local researchers to meet the high standards for publication. Research in northern Uganda is extremely competitive because researchers with more connections and resources are often imported from the Global North and they displace the local researchers. As a result people are more likely to give these imported researchers more information than they might a local researcher who they believe has fewer resources. Research in places such as northern Uganda is often framed as something that foreign people do.

Armed with her PhD, Teddy aspires to overcome these challenges and manage her own research projects. Teddy has already contributed a grounded understanding of programming, practice, and emergency settings to Feinstein’s work. She is successfully building her career in research in a competitive setting that does not typically favor women from the Global South. However, it can still be difficult for her to attract the same level of funding as more advanced researchers.

The Feinstein International Center is seeking support for young scholars like Teddy whose unique skillsets and backgrounds allow them to pursue their own research on critical global issues. With support, these young scholars can push the humanitarian field forward by promoting the use of local perspectives to understand the complex socio-cultural contexts in which researchers and practitioners conduct their work. Teddy is capable of completing work that matches or surpasses that of imported researches, she only needs continued support and opportunities to bring her voice to the table.

Teddy is one of Feinstein’s Young Scholars that we are seeking funding to support. Learn more about Teddy and her research here.