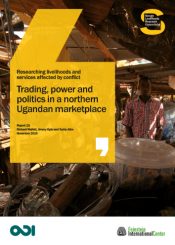 Trading, power and politics in a northern Uganda marketplace

What happens when attempts to modernize and formalize economic activity come into contact with the local realities of how trading, power and politics actually work? It is often assumed that reforms and interventions along these lines will create jobs, improve conditions and boost vendor incomes. But experience suggests they are often met with disappointing results. So what is going on?

Through a case study of one recently redeveloped marketplace in northern Uganda, this study sets out to shed some light on this question. It does so through mixed methods, drawing on semi-structured interviews with vendors and officials, as well as a small-scale survey of just over 200 vendors operating in the regenerated space, between September 2015 and January 2016.

Analysis points to the challenges associated with reordering economic life, particularly in exactly the way intended. And in doing so it raises questions of the capacity of agencies and governments to control processes of local economic development.

The research suggests that economic interventions are subject to forces of the local context. We see this in two senses. First, where intervention logics fail to cohere with the realities of how economic activity works – of how traders operate and of what drives them – they are unlikely to ‘fit’ perfectly, and are therefore likely to be met with disappointing results. In Lira town, these include rejection by some traders of the new marketplace.

And second, economic spaces are just one of the many arenas in which established routines of power and politics play out. Interventions attempting to reorder them thus become inevitably branded with the features of the local political settlement. This then has the potential to ‘derail’ such efforts from achieving their desired vision.