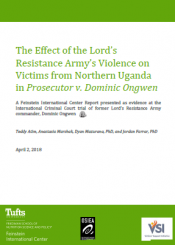 The Effect of the Lord’s Resistance Army’s Violence on Victims from Northern Uganda in Prosecutor V. Dominic Ongwen

In 2015, 2,605 living victims from northern Uganda nominated two lawyers to represent them in the case against Dominic Ongwen, ongoing before the International Criminal Court (ICC). In January 2016, 70 charges were confirmed against Dominic Ongwen. The Legal Representative for the Victims hired the services of a team of experts from Tufts University and Harvard University to conduct an independent, in-depth assessment of the victims’ experiences before, during, and after the attacks at Abok, Odek, and Lukodi internally displaced camps. We compared these findings to data on the larger populations of Acholi and Lango sub-region. The report was submitted as evidence, presented, and defended before the ICC in May 2018. The report contains representative findings on the 2,605 living victims regarding:

We find that compared to the rest of the general war-affected populations of Acholi and Lango sub-regions, these victims have suffered more war crimes and crimes against humanity, have worse physical and psychosocial health, fewer assets, worse food security,and less access to potable water. Without significant intervention, we expect that the victims will continue to suffer poor health, diminished human capacity development, as well as diminished physical and cognitive development for their children, and poor outcomes for their children’s education.