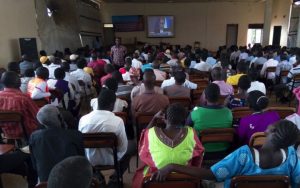 On Tuesday March 10, Dyan Mazurana, Anastasia Marshak, and Tom Dannenbaum presented findings from a Feinstein assessment of the lasting effects of massacres conducted by the Lord’s Resistance Army (LRA) in Uganda on victim populations. These findings were presented as evidence by Teddy Atim at the International Criminal Court (ICC) in a case against Dominic Ongwen, a top commander in the LRA. Ongwen is on trial for 70 counts of war crimes and crimes against humanity. The Feinstein research team is among the first to present commissioned research as evidence for the ICC. 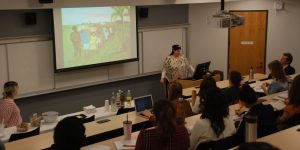 Dyan presented a brief history of the war between the Government of Uganda and the LRA, which started in 1986 and continued to intensify through the early 2000s. Dyan explained that the LRA was known for mass looting, brutal killings, and burning villages and the people living in them. They carried out massacres in a systematic and widespread manner.

Over 20 years of interviewing more than 3,000 survivors of attacks, Dyan, Teddy, and Anastasia have produced some of the most reliable data to date about the effects of the war on civilians. During the conflict, the research team documented what was happening, and after the war, their research shifted to look at how people move forward. In 2017, the prosecutor representing more than 2,000 victims of the LRA contacted Teddy and Dyan to carry out research to support their case against Ongwen. 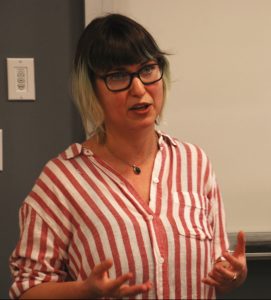 Anastasia presenting findings from the study.

After Dyan presented background on the conflict and the study’s origins, Anastasia discussed how the research team was able understand the impact of specific war crimes in Abok, Odek, and Lukodi internally displaced camps on the people living there. To isolate the impact of these specific massacres, the team had to compare data from people who were living in the camps (the victim populations) with people who were living in the Acholi and Lango sub-regions of northern Uganda, but not in the camps (the general population).  Feinstein’s research team was in a unique positions to conduct this study because they were already working on the Secure Livelihoods Research Consortium (SLRC) project  in those regions. With data collection coming up, the research team reproduced certain modules from the SLRC survey to ask of the victim population at the same time the survey was conducted with the general population. This allowed the team to compare the the two populations to see if the victim population fared worse than the general population.

As Anastasia discussed the findings from the study, Dyan read quotes from victims. This guided the audience from this desensitized data back to the fact that they are talking about real people and real experiences. The study’s findings included: 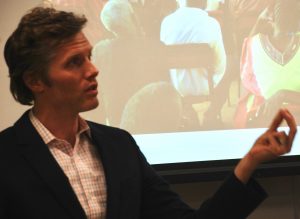 Tom situating the research in the ICC.

After presenting findings and stories, Tom Dannenbaum explained the legal process of convicting Dominic Ongwen and how the court will use the study findings. He described the complicated relationship that the ICC has with the rights of victims. As a criminal court, the ICC is only concerned with proving guilt or innocence. This often means that victims are not able to represent themselves in the way they would like.  This type of evidence has the potential to mitigate some of these problems by giving voice to many victims in a comprehensive way and presenting a holistic claim in court. While this study cannot prove the guilt or innocence of Ongwen, the study will help the court in assessing reparations to the victims. Reparation recommendations made by the research team include:

The panel event wrapped up with questions from the audience about specifics on study methods and the reception of the study evidence by the ICC. The panelists described how the prosecutor and the legal team for the victims were very interested in this approach, and hope to implement similar studies and data in other cases moving forward. The judges of the trial and the legal representatives in the case have also indicated that they will be drawing on evidence form the study to come to a decision about allocating reparations.