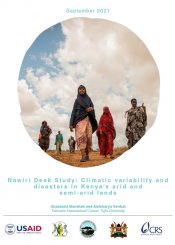 Acute malnutrition continues to be a significant and persistent problem in the Kenyan arid and semi-arid lands (ASALs) despite large investments by international and national stakeholders. While there tends to be a strong emphasis on the immediate (inadequate dietary intake and disease) and underlying drivers (food insecurity, inadequate social and care environment, and insufficient health services and unhealthy environment) of acute malnutrition in research and programming, more basic causes, such as climate, seasonality, livelihoods, and institutions are frequently ignored. However, in contexts like the Kenyan ASALs it is critical to understand these basic drivers. To partially address this gap, this desk review uses available secondary data to better understand climate and seasonality as it relates to acute malnutrition.

This desk study provides an overview of the patterns and variability in climate (temperature, precipitation, and vegetation), conflict, reported disasters, and nutrition outcomes using secondary data. The emphasis is on Marsabit and Isiolo counties, with even more detailed data on the three sentinel sites of interest—Garbatulla and NgareMara wards in Isiolo and Laisamis ward in Marsabit. We also present findings across Marsabit, Isiolo, and neighboring arid and semi-arid lands (ASAL) counties in Kenya with similar climatic conditions. The desk study found:

Thus, all together the secondary data analysis indicates extreme levels of seasonality and variability across the Kenya ASALs and within Marsabit and Isiolo counties. The findings around nutrition outcomes further underscore that seasonality is present, but for whom and who is most vulnerable is far more difficult to unpack in the secondary data alone. Primary research during phase 2 of Nawiri will seek to address some of these gaps and remaining queries and identify programmatic recommendations to address acute malnutrition in Isiolo and Marsabit counties.

This desk study is part of a larger review that also covers underlying and immediate drivers, natural resource management, and livelihoods.

This study is part of the Nawiri (Nutrition in the ASALs within Integrated Resilient Institutions) program. Nawiri aims to sustainably reduce persistent acute malnutrition by designing and implementing an approach for supporting, strengthening, and protecting systems and institutions. The project is funded by USAID/Bureau of Humanitarian Assistance (BHA) and the consortium implementing the program in Isiolo and Marsabit counties in northern Kenya is led by Catholic Relief Services (CRS).