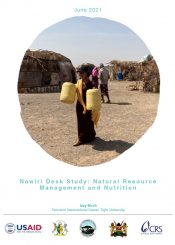 Livelihoods in the Kenyan arid and semi-arid lands (ASALs) are predominantly derived from the natural resource base, even for many who have settled. This study seeks to understand how land access and natural resource management (NRM) policies, institutions, and relationships are changing in the ASALs, with what consequences and for whom, and the potential impact on livelihoods, food security, and nutritional status.

Some key findings from the report include: