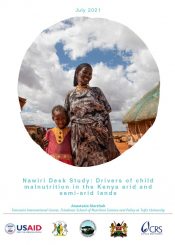 Acute malnutrition continues to be a significant and persistent problem in the Kenyan arid and semi-arid lands (ASALs) despite large investments by international and national stakeholders. To better understand how to improve programming with the goal of preventing a child from becoming acutely malnourished we reviewed existing literature from the ASAL region. While the focus of this desk study was on immediate (inadequate dietary intake and disease) and underlying drivers (food insecurity, inadequate social and care environment, and insufficient health services and unhealthy environment), additional desk studies under Nawiri also reviewed the evidence base on basic drivers: natural resource management, climate and seasonality, and livelihoods. This desk study found that:

The review confirms that acute malnutrition is a problem in the Kenya ASALs, and that most of the drivers are under-studied, and yet several specific assumptions permeate the literature and recommendations.

While the evidence base on drivers of malnutrition is fairly slim, this desk study does offer significant information to inform further research. Primary research is being conducted during phase 2 of Nawiri to address some of the gaps in the evidence base, test existing assumptions, and identify programmatic recommendations to address acute malnutrition in Isiolo and Marsabit counties.

This study is part of the Nutrition in the ASALs within Integrated Resilient Institutions (Nawiri) program. Nawiri aims to sustainably reduce persistent acute malnutrition by designing and implementing an approach for supporting, strengthening, and protecting systems and institutions. The project is funded by USAID/Bureau of Humanitarian Assistance (BHA) and the consortium implementing the program in Isiolo and Marsabit counties in northern Kenya is led by Catholic Relief Services (CRS).