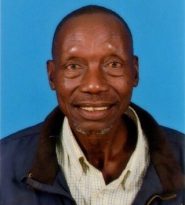 Working with Feinstein Since: 1995
Based in: Lodwar, Kenya

Darlington Akabwai conducts research and is responsible for research operations for Feinstein projects in Uganda and South Sudan, with an emphasis on Karamoja. He works closely with governments and local communities to ensure that research projects are carried out effectively and respectfully. Having worked on community-based programs with pastoralist communities in Africa for more than 25 years, Darlington is an expert on indigenous knowledge and culture. His training as a veterinarian and his reputation as a peacemaker affords him great respect throughout the region. Officials within the African Union’s Conflict Management Unit consider him to be one of the most respected and successful peacemakers in Uganda, Kenya, and Sudan, and they regularly call on his expertise.

Prior to joining Feinstein, Darlington pioneered community-based approaches to livestock care in East Africa and was instrumental in establishing programs that controlled rinderpest in Ethiopia, Sudan, Uganda, and Kenya. With the African Union, Darlington developed one of the cornerstones of its work: pastoral conflict resolution and management, including working with local women to bring peace to the area with “Women’s Peace Crusades.”

He holds a degree in veterinary medicine from the University of Nairobi.

In November 2021, Pastoralism released with a special section of articles coming out of the Karamoja Resilience Support Unit’s 2019 conference “Pathways to Resilience in the Karamoja Cluster.” It includes…

Feinstein’s work as part of the Apolou project seeks to understand the impacts over time of a shift to an increasingly cash-based economy on different wealth, livelihood, and demographic groups.

This USAID-funded five year project (2012-2017) aims to improve livelihoods outcomes for the pastoral, agro-pastoral, and agrarian populations in the region.

This fifth year report examines key areas of change in Karamoja over the past five years to inform development programming decisions.

This report reviews the state of animal-based livelihoods in the Karamoja region of northeastern Uganda and examines how animal ownership affects a household’s ability to weather shocks.