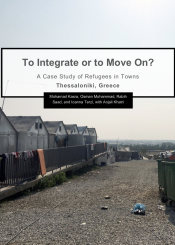 Thessaloniki, Greece: A Case Report in Refugees in Towns

Thessaloniki is known by Greeks as the “Mother of Migration,” due to its centuries-long history of providing refuge to those fleeing persecution and conflict, from Sephardic Jews in the 1400s to Greek refugee returnees in the 1900s. Today, Thessaloniki hosts asylum seekers and refugees from Syria, Afghanistan, Iraq, Turkey, and south Asian and African countries. Some refugees treat Thessaloniki as a transit city where they stay while preparing to travel to other, wealthier European countries. Others see Thessaloniki as a permanent home. This report attempts to shed light on the integration process for the most recent wave of refugees in Thessaloniki. It is written by a four-person team of Iranian, Lebanese, Greek, and Pakistani nationals who work in the humanitarian sector in Thessaloniki.