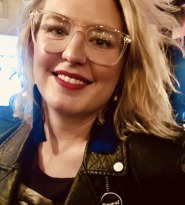 Kinsey SpearsResearch Assistant and Social Media Manager
Working with Feinstein Since: 2018
Based in: Washington DC

Kinsey is a doctoral student at The Fletcher School where her work focuses on gender; security studies; and women, peace, and security. She is a research assistant and social media manager at the Feinstein International Center, and teaching fellow for Feinstein and Fletcher faculty. Kinsey is also a Non-Resident Fellow at the New Lines Institute in the Gender Policy Program.

Kinsey completed her master’s at The Fletcher School, where her thesis explored the ways that children were impacted by security sector reform policies in Afghanistan. Prior to pursuing her degrees at Fletcher, Kinsey worked as the director of scheduling for a United States senator, served as a Peace Corps Volunteer in northern Cambodia, and worked with refugee communities in the Atlanta area. Kinsey holds a bachelor of arts from the University of Georgia in community development and Arabic.

Kinsey resides in Washington DC where she is completing her dissertation work, looking at the different ways the United States Military is implementing the United States’ Strategy on Women, Peace, and Security (WPS) to identify roadblocks and entry points for success.

In March 2022, Kinsey Spears and Emily Prey teamed up to explain why US-China relations need gender analysis for Newlines Institute. Their article explains why the US must apply a…

Kinsey Spears, Bridget Conley, and Dyan Mazurana published an Occasional Paper on gender, famine, and mortality with the World Peace Foundation in December 2021. During times of famine, sex, gender,…