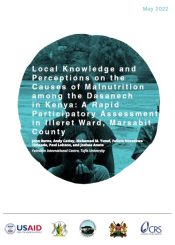 In early 2022, northern Kenya was suffering from a severe drought that resulted in widespread livestock mortality and increased child malnutrition and mortality.  To develop an appropriate response to the worsening situation, the Nawiri project conducted a rapid community-level analysis of the causes of acute malnutrition in Illeret ward in Marsabit County in Kenya. Illeret is primarily inhabited by the Dasanech community who until recently have depended on the Omo River delta for their livelihoods.

Participants identified livelihood shocks and trends over the past twenty years, including the ongoing drought as the root causes of malnutrition. Aside from the drought, the main shock to livelihoods has been the loss of the flood recession farmland and the dry season cattle grazing reserve along the Omo delta due to rising water levels on Lake Turkana.  The assessment looked at changes in the contribution of different food sources, changes in herd composition, and changes in the proportion of households engaging in fishing, which is a survival strategy not a meaningful and sustainable livelihood in this area.

The results show a severe decline in livelihoods and food security since 2010. For example, the results show a 60 percent decline in livestock herds between 2010-2020 and this increased to 90 percent losses following the recent drought. The results also show a similar trend in household food availability largely attributed to the loss of food from livestock and flood retreat farming on the Omo delta. As a result, people have become increasingly dependent on coping strategies such as fishing and firewood collection. These labor-intensive activities have translated into an increase in women’s workload over time which participants associated with both child and maternal malnutrition.

These results indicate that the adaptive capacity of the Dasanech in Kenya has reached a critical limit. Following the drought of 2021–2022, it’s uncertain what the future holds for this community unless clear pathways towards improved livelihoods can be identified and supported.

A brief snapshot of the results can be found in this briefing paper.