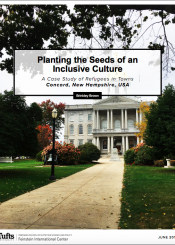 The Concord report looks from the eyes of a lifelong resident on a city that has worked to make itself a local bastion of inclusiveness against anti-immigrant rhetoric at the national level. The report focuses on experiences of high school students, who in many cases have set the tone for the city when outbursts of xenophobia have occurred. Despite the intentions of many Concord residents to make the city welcoming and inclusive, however, the report identifies some obstacles to integration of refugees in Concord, especially the clustering of migrants in low income housing census tracts of the city.