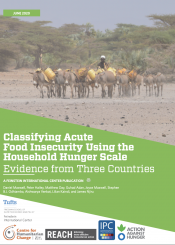 The currently accepted means of categorizing household food insecurity and identifying famine or famine risk is the Integrated Food Security Phase Classification (IPC) tool. Recent IPC analyses in countries at risk of famine have had difficulty correctly classifying households in Phase 5:“catastrophe”or famine conditions. The Household Hunger Scale (HHS) is the only means of differentiating households in Phase 5 from Phase 4 (“emergency”). However, its ability to accurately distinguish between these phases has never been field tested. That was the purpose of this study.

This study employed an active case identification approach to identifying the worst affected households in communities shown by secondary review to be hard-hit by acute food insecurity. Researchers interviewed these households in depth (including HHS questions) and noted observations about household conditions. The interview team then classified households according to the definitions in the IPC Guidelines (Version 3) and compared those classifications with the classifications based on HHS scores.

In roughly three-quarters of the households, HHS scores matched the in-depth interview results. However, the definitions of households in Phases 4 and 5 are so overlapping that in some cases, households were classified as “borderline.” Subsequent re-analysis (both qualitative and quantitative) reclassified borderline cases to one or the other phase. Overall, this study found that HHS does a reasonably good job of classifying households by IPC Phase. The study makes recommendations for how classification could be further improved.