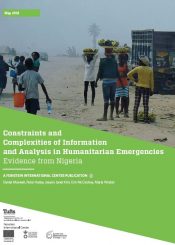 Constraints and Complexities of Information and Analysis in Humanitarian Emergencies: Evidence from Nigeria

Since the mid-2000s, an ongoing humanitarian crisis in the three northeastern states of Nigeria has spread to the greater Lake Chad basin. The Boko Haram conflict turned into a major security problem that led to widespread displacement and a major humanitarian catastrophe. UNOCHA estimates that more than 20,0000 people have been killed, 1.6 million are internally displaced, and 200,000 are living as refugees in neighboring countries.

Nigeria uses the Cadre Harmonisé to identify and classify the severity of food security situations. This report examines this system to better understand the technical and political constraints to analyzing famines and extreme emergencies.

This report was jointly written by researchers from the Feinstein International Center and the Centre for Humanitarian Change in Nairobi.