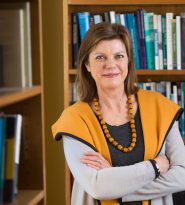 Working with Feinstein Since: 2000
Based in: Medford, MA

Karen is a recognized expert in the field of forced migration, and she consults and writes widely on this topic. From 2013–2014 she headed the Joint IDP Profiling Service (JIPS) in Geneva, on leave of absence from Tufts. From 2000–2005, she directed the Alchemy Project, which explored the use of microfinance as a way to support people in refugee camps and other displacement settings.

Karen received her B.A. from the University of Witwatersrand in Johannesburg, her M.A. from Northeastern University, and her PhD in Political Science from MIT.

A South African by birth, Karen travels there frequently. She lives in Brookline with her son and dogs.

Karen Jacobsen was quoted in an article from Marketplace titled, “Climate Change may force 200 million people to migrate, study says.” This article reports on the estimated number of people worldwide who…

This project collects and commissions case studies of urban settings (towns, cities or sub-areas of cities) in which refugees or internally displaced people have been living for more than two years.

The project has three components, each designed to give a different perspective on Sahrawi refugees.

Refugees in Towns: Experiences of Integration

In this Forced Migration Review article, Refugees in Towns (RIT) project director Karen Jacobsen presents the project, why it is of importance in our current political climate, and what the…