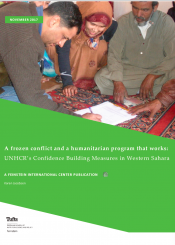 A frozen conflict and a humanitarian program that works: UNHCR’s confidence building measures in Western Sahara

This report describes a relatively unknown humanitarian program that has addressed one of the saddest aspects of displacement – the separation of families. Between 2004 and 2014, UNHCR’s Confidence Building Measures program (CBM) helped more than 20,000 refugees in the Tindouf desert camps of Algeria to visit their families in Western Sahara, from whom they’d been separated since the conflict in Western Sahara began (late 1970s). The CBM program was brought to a halt by politics, but the report suggests that the time is right for this ‘humanitarian bridge’ to be re-opened. The report describes the CBM program in the context of Western Sahara, and indicates why the time is right to re-start it.

The Western Sahara conflict is a forgotten one; few people outside the region even know where it is. But lessons from it must be learned for other protracted situations, particularly because a new generation of frustrated youth is growing up in longstanding camps all over the world. UNHCR’s CBM program has shown that humanitarian activities are possible even where politics and lack of media attention make them difficult. When it comes to protracted refugee situations, the world is desperate for a positive narrative. UNHCR’s CBM program provides such a narrative for separated refugee families.

For an update on the project as of May 2020 click here.