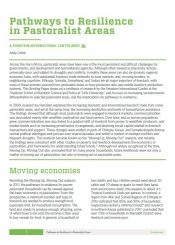 Briefing Paper: Pathways to Resilience in Pastoralist Areas: A Synthesis of Research in the Horn of Africa

This is a briefing paper of the full report.

Across the Horn Africa, pastoralist areas have been one of the most persistent and difficult challenges for governments, and development and humanitarian agencies. Although often viewed as physically remote, universally poor, and subject to droughts and conflicts, in reality these areas can also be economic hubs, with substantial livestock trade networks to local markets, and crossing borders to neighboring countries. Ethiopia, Somalia, Somaliland, and Sudan are all major exporters of livestock with most of these animals sourced from pastoralist areas, or from producers who rely on mobile production systems. This synthesis paper reviews 20 years of our research and focuses on the increasing socioeconomic differentiation in selected pastoralist areas, and the implications in terms of pathways to resilience.

This paper was made possible by the generous support of the American people through the United States Agency for International Development (USAID) Center for Resilience. The contents do not necessarily reflect the views of USAID or the United States Government.