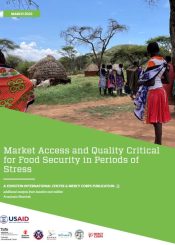 This briefing paper describes how market access is associated with household food security and dietary diversity in the Karamoja region of Uganda in 2018 and 2019. In 2018, according to both the study’s primary data and secondary data, households experienced significantly worse conflict, climate, and economic shocks compared with 2019. These shocks in 2018 led to a decline in livestock production, increase in food prices, and declines in terms of trade.

While the experience of shocks was worse according to many indicators in 2018, household food security and , dietary diversity data remained relatively similar across the two years. The data indicate that greater use of markets during the more stressful 2018 year might have mitigated the expected, but not observed reduction in food security. Better market quality and access was associated with using fewer short-term coping strategies and better food security and dietary diversity, but only in 2018,  when households experienced more shocks. Thus, households are likely to be more reliant on markets during periods of greater stress.

This analysis is part of the United States Agency for International Development/Bureau for Humanitarian Assistance (USAID/BHA)-funded Apolou Activity, a consortium led by Mercy Corps. It was designed to help Mercy Corps and other national and international actors to address youth’s vulnerability and opportunities in the Karamoja sub-region.

The findings are part of a four-year study carried out in four districts of the Karamoja sub-region. The analysis and findings in this report focus on the first and second round of quantitative data from November/December 2018 and 2019. The data come from a longitudinal two-stage randomized cluster sample of approximately 500 households across 52 villages. The same respondents were interviewed across both years.