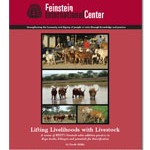 Between 2008 and 2011, over two thousand households were provided with informal loans for livestock value addition in an effort to graduate them from the Productive Safety Net Programme in Raya Azebo woreda, Ethiopia. The study findings indicate that most households benefited from this intervention through speculation and individual business acumen despite the lack of adequate and quality feed for the livestock they transacted. Encouraging livestock feed production in the woreda is regarded as the next logical step for attaining better economic returns not only for livestock value adders but also for would-be feed producing farmers.