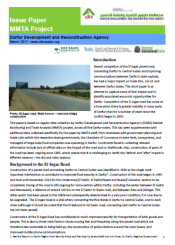 Issue Paper: Impact of the El Ingaz Road in Darfur

In Sudan, the El Ingaz paved road now connects Darfur to Central Sudan. The road was built in stages, with the critical stage between El Fashir and Central Sudan completed at the end of 2014. By early 2017 there were only two outstanding sections between Central Sudan and El Geneina in West Darfur still to be paved. Prior to the completion of the road, travel  to, from, and within Darfur was expensive (by air for passengers) or slow and arduous (by truck for many commodities). The El Ingaz road has improved communications and travel within Darfur, has contributed to improved security for road transportation, and has connected Darfur with Central Sudan. This has had a major impact on trade into, out of, and between Darfur states. This issue paper describes details about these impacts of the road and has identified associated economic opportunities for each of the five Darfur States. As trucks are returning to Central Sudan emptier than they arrive, reflected in lower transportation costs between Darfur and Central Sudan than vice versa, this indicates scope for increased trade flows out of Darfur.

This issue paper was written by the Darfur Development and Reconstruction Agency with advisory support from Feinstein.