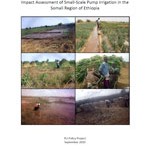 Gode zone in the Somali National Regional State of Ethiopia is a remote area in the east of the country, characterized by marked under‐development and frequent humanitarian crises. In addition, various forms of conflict in and around the zone, including in neighbouring Somalia, have created a very difficult operational context for international NGOs.

The L‐SAP project of CHF International was funded by OFDA for one year, in three woredas in Gode zone, and ended in December 2008. The project aimed to improve the household income and assets of targeted poor households through establishing group‐based small scale irrigation schemes along the Wabe Shabelle River for the production of food and cash crops. The project established 18 ‘Asset‐building Groups’ (ABGs), each comprising at least 50 households. The ABGs were provided with water pumps, fuel, seeds and tools, and training. Each group was to be allocated 25 ha of land, equivalent to 0.5 ha/household for a group of 50 households. The project was assessed in mid 2010, 18 months after the project ende