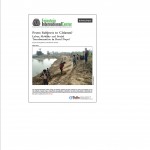 From Subjects to Citizens?Labor, Mobility & Social Transformation in Rural Nepal

Nepal is on the cusp of a major “transformation” from a relatively stable condition of reproduction of social and economic relations based on feudal and caste strictures to a more fluid and open condition where the old “order” is changing if not collapsing and a new order – or disorder – is emerging. This report presents the findings of a two-month long field research on the nature of changes on labor relations and mobility in western Nepal. It explores a number of important questions:

Our field research suggests that labor relations in rural Nepal have undergone major changes in recent decades accompanied by livelihood diversification and mobility. Although traditional forms of semi-feudal labor relations have not disappeared completely and some poorer households are still engaged in semi-feudal and caste-based labor arrangements in agriculture, there is clear evidence of increasing numbers of laboring households involved in wage labor within, or increasingly outside, the village. Overall, we argue that these changes indicate a clear shift in the social and economic position of the laboring population from subjects to citizens. This change has increased economic and political agency of the laborers and laboring households but is not free from vulnerabilities and risks.