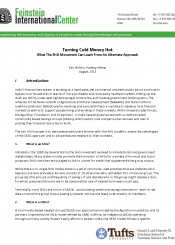 India’s efforts in grassroots finance have been dominated by a powerful form of savings and loan clubs. Self-Help Groups, or SHGs as they are called, nudge urban and rural poor women and men to save small amounts of money. They then borrow pooled money to meet household and livelihood needs. Since the early 1990s, the National Bank of Agriculture and Rural Development (NABARD) has promoted an SHGs bank-linkage program. SHGs tap bank credit to augment the funds they have accumulated on their own, allowing members to reclaim lost land, start new enterprises, or build roads and schools. More recently NABARD is helping groups to save funds in banks. While the linkage effort is reaching tens of millions of people, it has not addressed many issues of unmarried women, migrating men and women, or ultra-vulnerable households. This paper proposes that NABARD investigate a share-based system, called Community Based Savings Groups, where SHGs can reach and accommodate households thus far blocked from membership.