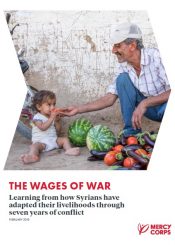 The Wages of War: Learning from how Syrians have adapted their livelihoods through seven years of conflict

The scale of death and suffering in Syria is monumental. What began as a peaceful protest in 2011 has spiraled into a humanitarian crisis unprecedented for our modern times: The war has killed as many as 400,000 Syrians and displaced 11 million more. Humanitarian needs remain enormous as the conflict wages on. The U.N. estimates that 8 in 10 people in Syria—including 6 million children—require humanitarian assistance. The crisis has set Syria’s development back nearly four decades. Despite these immense challenges, Mercy Corps’ work in Syria has found that some households are managing the devastating impacts of war better than others. We undertook this research to understand why.