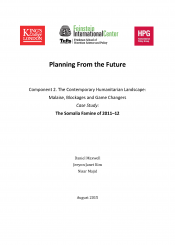 The Somalia famine of 2011 was to date the worst famine of the 21st Century. In retrospect the disaster should never have reached the severity that it did, but the famine developed as the result of a major drought, rapid food price inflation and conflict, combined with the lack of an adequate preventive response from either Somali authorities or the international humanitarian community. The response failure occurred because a “terrorist” or proscribed group (al-Shabaab) controlled much of the affected area, and counter-terrorism legal constraints outweighed humanitarian concerns. Both access and funding were extremely constrained up to the point that it was outright declared.

The paper reviews the main lessons learned from this crisis. It is one of four case studies developed for the “Planning from the Future” study, conducted in collaboration with Kings College London and the Humanitarian Policy Group.