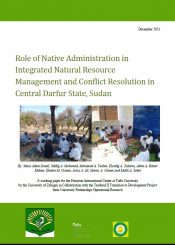 The Native Administration (NA) in Sudan is still commonly known by the term ‘traditional leadership,’ the name given to the formal system in the early 1930s during the British colonial period (1916-1956). Among the powers and responsibilities of the NA system were the manage­ment and conservation of the environment and natural resources, and resolution of conflict over land and natural resources.

Researchers from the University of Zalingei in Central Darfur, Sudan, conducted this study to improve the understanding of the role played by the NA and local traditions in integrated natural resource management in Central Darfur over the last twenty years, and to understand the conflicts and disputes associated with land access.

The study focused on communities targeted by the Taadoud project that employ a range of different livelihood strategies, e.g., farming and herding. Data were collected from 12 villages in Zalingei and Wadi Salih localities in Central Darfur State. These villages were selected to represent different livelihood groups (farmers and pastoralists).