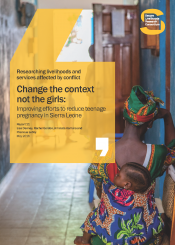 Change the context not the girls: Improving efforts to reduce teenage pregnancy in Sierra Leone

In 2013 Sierra Leone ranked among the ten nations with the highest rates of teenage pregnancy in the world. Concerns about significant increases in Sierra Leone’s already high rates of teenage pregnancy during the Ebola crisis have led to redoubled efforts among policy-makers and development practitioners to address this problem. This report examines post-Ebola programming responses and asks where there is room for improvement. The central argument of the report is that common programming to reduce teenage pregnancy focus overwhelmingly on girls, rather than addressing the wider context that shapes girls’ actions and options. This approach ignores the fact that girls are getting pregnant through multiple types of sex; it assumes that knowledge promotion can lead to behavior change; and it overlooks key justice and socio-economic components of the problem.  If the Government of Sierra Leone’s renewed National Strategy for the Reduction of Teenage Pregnancy is to succeed, a more contextually tailored approach is needed. To that end, five recommendations are proposed:

The briefing paper that summarized the paper is available here.