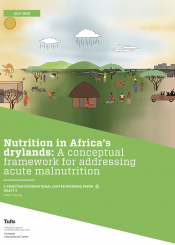 The brief argues that for this analysis to make a real difference, the process and ownership of causal analysis needs to be localized by integrating it within the systems and institutions operating at the local level upwards.

While this report is specifically about Africa’s drylands, 43% of the globe is classified as drylands and therefore may be relevant in other contexts.