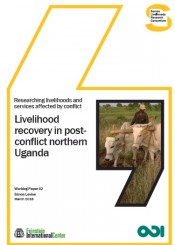 This study complements the larger Secure Livelihoods Research Consortium Uganda survey by providing deeper insight into processes of recovery in northern Uganda. It focuses on:

The study finds that recovery in northern Uganda remains a constant struggle. The depth and breadth of poverty belie simple talk of success. Poverty is closely related to the failure of state and other institutions to perform their duties. However, this dimension is almost universally ignored both by those who are supposed to help address that poverty and those who are responsible for the performance of those agencies. Further, aid is largely irrelevant for at least three reasons: (1) it is too insignificant and too narrowly distributed to make a difference; (2) it ignores the realities of people’s lives, what people are trying to do for themselves and the actual constraints they face, especially in relation to access to basic services; and (3) the way in which it is designed and implemented make it useful mainly for feeding the corruption of the elites and the (relatively) powerful.