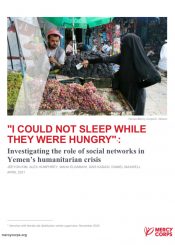 “I could not sleep while they were hungry”: Investigating the role of social networks in Yemen’s humanitarian crisis

Six years of civil war have left Yemenis in the grip of the world’s worst humanitarian crisis, with more than 16 million food insecure. While external aid is saving lives in Yemen, it is not necessarily the main source by which Yemenis cope during the ongoing crisis.

So how are Yemenis coping? Experts on food security in Yemen, research from other contexts, and Yemenis themselves point to an obvious, but often under-recognized source of support: Households are relying on their social connections and support networks for survival. Mercy Corps is undertaking research to help aid actors better understand how social connections are supporting coping and survival in Yemen.