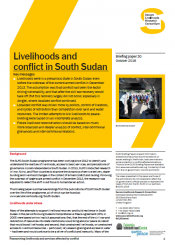 Livelihoods and conflict in South Sudan

More than five million people in South Sudan are currently in urgent need of humanitarian aid, with nearly one-and-a-half million displaced and another one million refugees. These figures indicate large-scale loss of lives and extreme disruption to livelihoods, which will take decades or generations to recover from. Yet livelihoods are often just expected to recover in a post-conflict environment. Findings from six years of research by the Secure Livelihoods Research Consortium do not support this argument; in some areas of South Sudan, support for livelihoods may have even been better during conflict. This briefing paper recommends a rethink in the way that aid actors approach questions of recovery and livelihoods in South Sudan. Rather than a simplistic either/or approach, what is needed is a much more localized and deeper analysis of conflict, inter-communal grievances, and inter-communal relations.