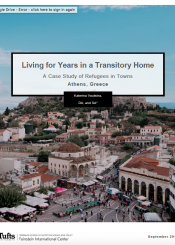 Athens, Greece: A Case Report of Refugees in Towns

Amidst an economic crisis, Greece’s cities found themselves host to thousands of refugees stuck in transit along the Balkans Route on their way to Northern Europe. This case study attempts to capture perceptions of integration of refugees, migrants, and the host population on how the city has been transformed by immigration, and how it has succeeded and struggled to transition from transit city to de facto host. The findings are the result of a collective effort between three co-authors, a Greek journalist and two refugees living in Greece, one from Syria and the other from Iran.*

*Co-authors are a male and a female from Iran and Syria respectively. They are still in a precarious situation in Greece and asked to remain anonymous.