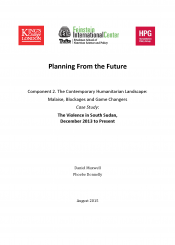 The Return to Violence in South Sudan

South Sudan became the world’s newest country in July 2011, but internal political struggles resulted in renewed violent conflict in December 2013, affecting nearly half the country’s population and displacing some 2 million. Over a hundred thousand South Sudanese were stuck in “Protection of Civilians” sites in major towns. The humanitarian response has faced many of the same challenges that arose in Operation Lifeline Sudan during the civil war. While the violence in South Sudan is still being played out, much can be learned from this complex case.

This report is one of four case studies developed for the “Planning from the Future” study, conducted in collaboration with Kings College London and the Humanitarian Policy Group.