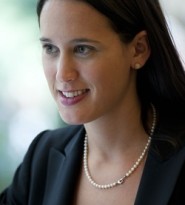 Working with Feinstein Since: 2013
Based in: Williamstown, MA
Phoebe Donnelly is the Stanley Kaplan Postdoctoral Fellow at Williams College, where she teaches on gender and conflict and security in Africa. She received her PhD in international relations from The Fletcher School of Law and Diplomacy at Tufts University in 2019. Phoebe’s dissertation examines forced marriage as a strategy of rebel groups and her case studies are al-Shabaab (in Somalia and Kenya) and the Lord’s Resistance Army (in Uganda).
Before starting her PhD program, Phoebe was the associate director of the Consortium on Gender, Security, and Human Rights at UMass-Boston. She also has policy experience through her work as a legislative correspondent for Senator Richard Blumenthal and as an intern for the State Department at the U.S. Mission to the UN.
Women in International Security (WIIS) selected Phoebe as one of their “Next Generation Gender Scholars.”
Phoebe holds a PhD in international relations and MA in law in diplomacy from The Fletcher School at Tufts University and a BA from University of Wisconsin-Madison.

On June 27, 2018 Phoebe Donnelly published The Interactive Relationship between Gender and Strategy in the Global Society journal. The article argues that gender affects the strategy of non-state armed…

This page brings together multiple projects related to gender, sex, and age in humanitarian response.

By Dyan Mazurana, Phoebe Donnelly | May 2017

This study examines the issue of sexual assault against humanitarian and development aid workers.

This report reveals that sexual abuse is a major threat to uniformed peacekeepers, especially women. The UN and troop- and police-contributing countries have not adequately responded to the issue.

STOP the Sexual Assault Against Humanitarian and Development Aid Workers

By Dyan Mazurana, Phoebe Donnelly | May 2017

This report contributes to understanding, preventing, and responding to sexual assault against aid workers. It presents findings on: who the survivors of sexual harassment and assault are who the perpetrators…